The best soft, chewy, and thick Snickerdoodles. Sharing all my tips and tricks for making delicious snickerdoodle cookies with chewy centers and perfectly crisp edges!

Once you’ve become hooked on these snickerdoodles, try these other delicious cookies: oatmeal cookies, chewy chocolate chip cookies, or white chocolate macadamia nut cookies. And if it’s Snickerdoodles you have a hankering for, I have more: Pumpkin Snickerdoodles and Caramel Snickerdoodles are both based on the original recipe but have their own unique twist. 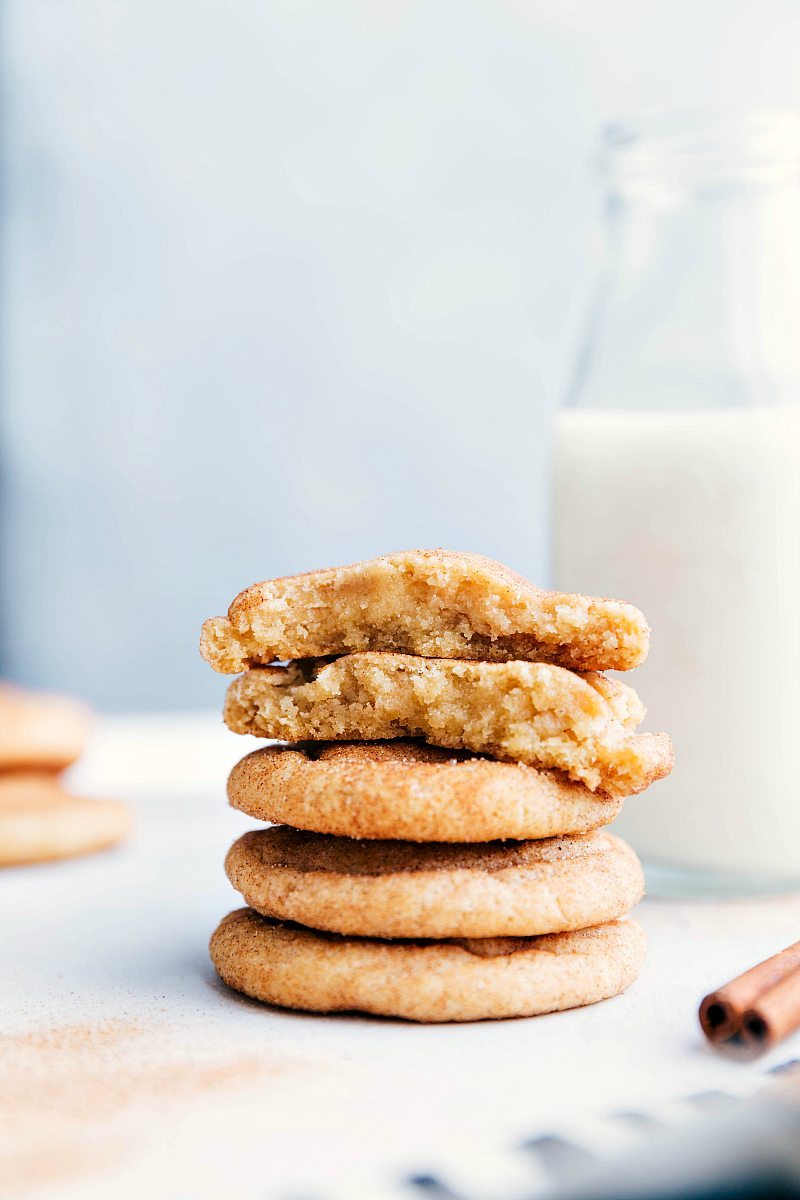 Snickerdoodles have always been just an “okay” cookie for me; I’d much rather have mine stuffed (or dipped) in as much chocolate as possible. But when my soon-to-be brother-in-law said snickerdoodles are one of his favorites, I set out to perfect the snickerdoodle cookie.

My sister and her fiancé are having a cookie bar at their reception with 10 different kinds of cookies and I volunteered to develop the recipes and make the cookies (luckily I have a lot of help on the baking!). I’ve been working on my final cookie recipes for months. (I get way too excited over these kinds of things!)

So I’ve worked on Snickerdoodles for a few months now and have made dozens of batches, trying to get them just right. And if I’m being honest, these cookies have not only converted me to a Snickerdoodle lover, but they’ve also been deemed by the almost brother-in-law to be the “BEST EVER.” These Snickerdoodles have just the right amount of cinnamon and are soft on the inside with perfectly crisp edges. The flavor is incredible, and the texture is unbelievable.

If you’ve never experienced the joy of a Snickerdoodle, you might be wondering what they taste like. Well, they’re buttery and sugary with a hint of vanilla and a little tang from the cream of tartar. The dough has a hint of cinnamon and the unbaked dough is rolled in cinnamon sugar before being baked, further enhancing the cinnamon flavor.

First things first: Snickerdoodles are sometimes confused with sugar cookies since they have a lot of the same basic ingredients.

What’s the difference between a sugar cookie and a Snickerdoodle?

The Joy of Cooking writes that Snickerdoodles are probably German in origin, but it’s also very possible that the name is simply a nonsense word without any particular meaning.

Before we get started on the process and talking tips, let’s talk about the ingredients!

Snickerdoodles are made of:

What is cream of tartar, anyway?  It’s a dry, powdery, acidic byproduct of fermenting grapes into wine. (Note: there is no alcohol content in cream of tartar.)  It’s official name is potassium bitartrate or tartaric acid. It’s often used in cooking as a stabilizer. For instance, recipes for homemade whipped cream or whipped egg whites often call or cream of tartar to keep the fluffiness from deflating.

How to make Snickerdoodles

For these cookies, we start with partially melted butter. I don’t melt it all the way, because it tends to make the cookies a bit greasy.

It may seem silly to melt the butter and then let it firm up a bit. Why not just use softened butter, then? Well, melted butter adds an incredible texture to these snickerdoodle cookies. But if you add hot melted butter to the batter, it melts the sugars, and that creates greasy cookies. So, let the melted butter sit for a minute or so to cool down. When you add that melted-but-cooled butter to a cookie recipe, chilling the dough is a MUST before baking. This matters because the fats need to re-solidify. If the dough is baked immediately with melted butter in it, the cookies will spread while baking and become thin, hard, and crispy. The longer the fat stays solid, the less the cookies will spread.

The sugar in the dough also gradually absorbs liquid so when you chill the dough, the sugar has a chance to absorb more liquid, further preventing spread.

Who knew so much science was involved in baking cookies?! 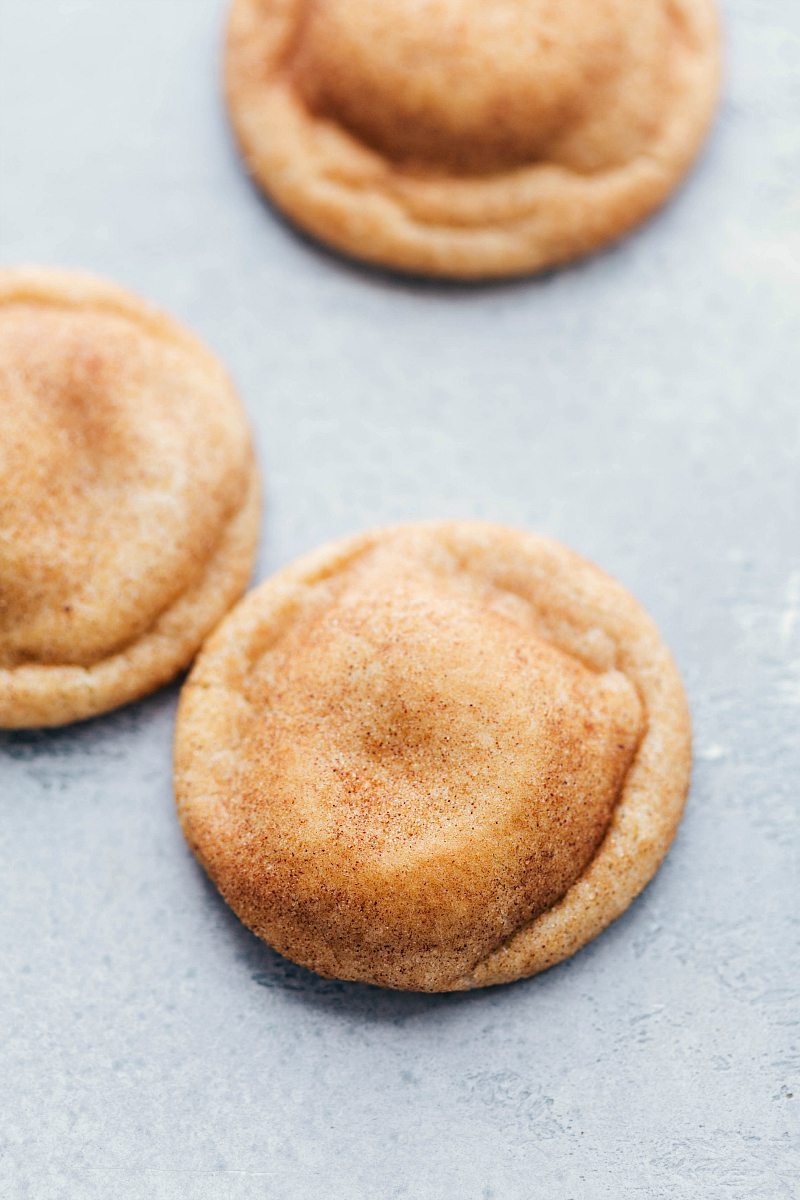 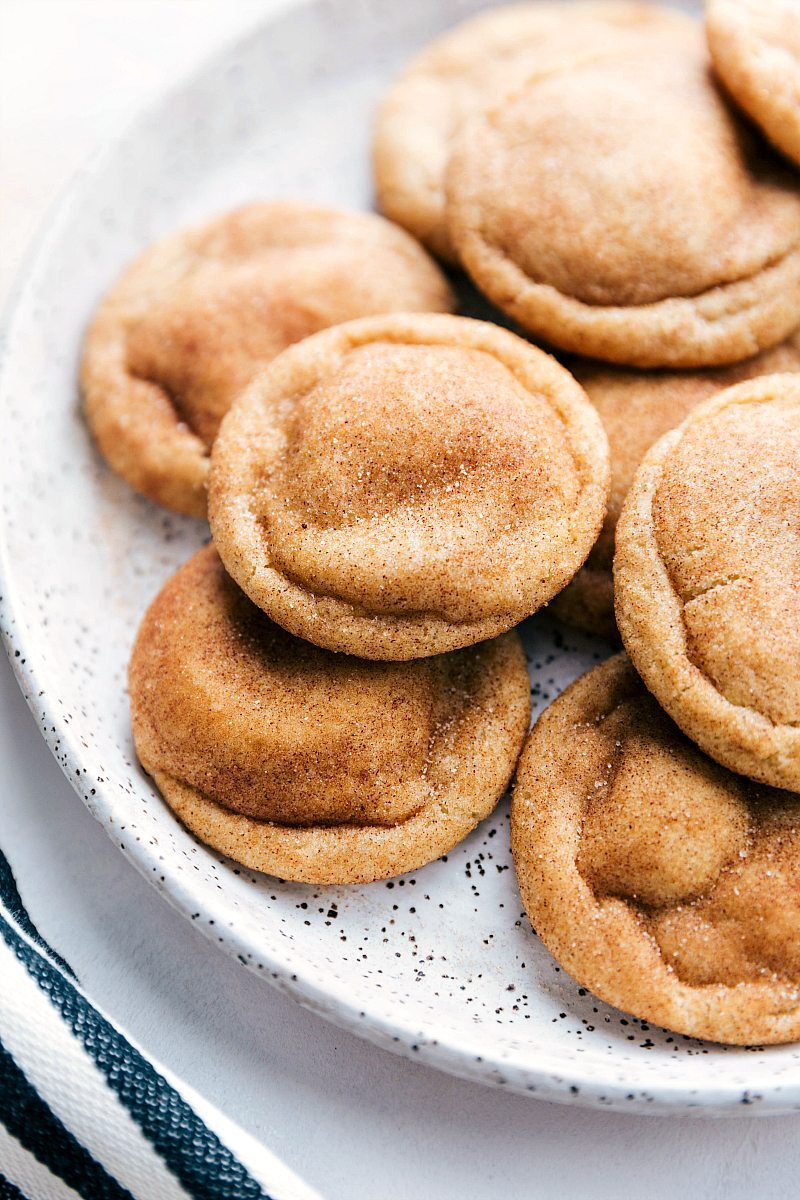 Testing began with these cookies on Genius Kitchen and evolved to become this recipe!

These are the very best soft, chewy, and thick Snickerdoodles.

These are the very best soft, chewy, and thick Snickerdoodles.